The Kharkiv National University of Arts has joined the Erasmus + program of the European Union. It supports a variety of projects, partnerships, events, academic mobility in the field of education, provides partner participation opportunities in international contests and exchange programs.

In the fall of 2017, under the Erasmus+ program, the Spanish delegation, including of the director of the Conservatorio Superior de Musica de Vigo (CSMV) Esteban Valverde Corrales, and the head of the European programs of Jose Luis Fernandes, visited Kharkiv. During the meeting with the rector of the KNUA Tetyana Verkina and the representatives of the university administration, they discussed various artistic and educational projects such as concerts, master classes, student exchange, as well as performing of national music in both Spain and Ukraine.

The first outcome of established partnership was participation of the KNUA students in the exchange program. Under the regulations of the Erasmus+, a group from the KNUA took part in one-year training course in the Conservatorio Superior de Musica de Vigo. Among them were Rostislav Golubov (guitar), Polina Kermesh (cello), Vitaly Lyashko (clarinet), Mykola Kuzmenko (flute), Victoria Horolskaya (bassoon). During their stay in Spain, P. Kermesh and R. Golubov became prize-winners at international music competitions. 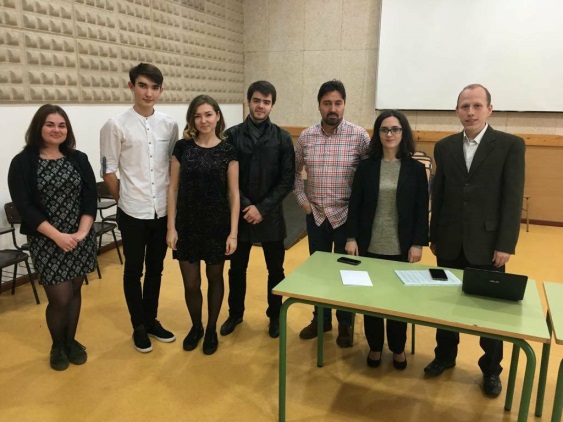 In the academic year of 2017-2018, at the invitation of the Spanish side, the partner institution was visited by Oleksandr Pryimenko, Valery Altukhov and Anna Sagalova. Associate Professor O. S. Pryimenko delivered a presentation regarding the system of education in the KNUA and was acquainted with the experience of the international office. Professor Valery Altukhov held master classes for clarinet players. Anna Sagalova introduced the Kharkiv piano school, held master classes and gave a concert.

In October 2018, the director of the Conservatorio Superior de Musica de Vigo, Esteban Valverde Corralez, became the head of the Association of Clarinetists of Spain this year, visited Kharkiv again.

In the framework of the XXV Festival “Kharkiv Assembly”, he conducted a series of master classes for clarinet players and gave a concert. The program of his recital included works of several Spanish composers which have been performed in Ukraine for the first time.

This duet of students was also invited to Madrid to open the meeting of the National Erasmus+ Agency as an evidence, proving a positive experience of cooperation between the Spanish and Ukrainian educational institutions within the framework of Erasmus exchanges, KA-107 (International Credit Mobility is an activity under Key Action 1) direction. The students performed at the Royal Theater of Madrid in front of almost 1000 people, representing the Kharkiv National University of Arts and Ukraine as a whole on an important event.

In 2019, the new projects are planned and preliminary agreements have been reached with other artistic institutions and faculties of European universities, in particular, from the Conservatorio Superior de Musica “Manuel Castillo” (Seville, Spain), Escola Superior de Música e Artes do Espetáculo do Porto (Porto, Portugal).